Are All Zeolites Really Toxic?

In the middle of 2016, Mike Adams – a well known blogger known as “The Health Ranger” published an article about his scientific tests on zeolite and its potential contamination with heavy metals. He usually goes after Big Pharma and exposes many issues.

His article on Zeolites caused much consternation, but unfortunately he got it wrong on several points. In case you hadn’t read it, he decried the use of zeolites as a valuable detoxing supplement, saying they contained aluminium and lead, and you should only take his newly invented caesium capturing product.

Periodically a scare erupts from people reading this blog and being concerned. This is our response giving the true view from an ethical supplier and its people.

Not The Whole Truth

Many who were scared by his claims might be denied the very great benefits that have accrued to a large number over the years.

Mike claimed that Zeolite is full of aluminium, which is released in the body, when taken.

What happens is that the minerals in zeolite include alumina (an oxide of aluminium), which is bound with silica. This bond is unassailable in the body and so aluminium is never free – it is locked away in a harmless compound.

In Mike’s test he subjected zeolite to concentrated nitric acid which dissolved the bonds and freed the aluminium.

What he didn’t realise is that

So Mike got the chemistry wrong, and he didn’t say what type of Zeolite he tested.

Lead can accumulate in the body over time, displacing calcium from the bones and causing chronic mental confusion. Mostly, it comes from the paints used on old houses that contained white lead oxide or old lead plumbing.

These were used until the 1950’s. Continual washing by the weather sluiced lead into the soil especially gardens around houses. We have several such customers who are now detoxifying.

Lets go back a step.

Zeolite occurs when molten lava hits seawater. It holds many minerals, good & bad. What it contains depends on the local minerals around. Zeolite is a peculiar crystal that has many points to it, each of which hold different minerals. The unwanted ones can be removed. There are several sub-types of zeolite – most have agricultural uses, only one known as Clinoptilolite is suitable for human ingestion.

What about heavy metals in Zeolites?

The Health Ranger claimed that raw zeolite, mined and packaged for sale has high concentrations of aluminium and lead. This is true for some suppliers. Superior (food grade) zeolite must come from a very pure site (in our case the mountains of Southern Turkey). It must be tested, scrubbed and purified – an expensive and prolonged process to remove the unwanted heavy metal products.

(In our case this happens at a large zeolite processor in Germany), and it must be tested at every stage for compliance with heavy metal removal requirements and EU standards.

So Mike is right. You shouldn’t buy RAW powdered zeolite.

That’s like buying a sponge that is already full of water. It won’t absorb any more water, and is no use to you. So beware of small online sellers offering cheap zeolites.

Not all companies purify their Zeolite this way – just the ethical ones!

So, What happens in the body?

When zeolite is ingested, either by capsules or by being mixed with water and swallowed, it passes through the stomach untouched and into the small intestine, where it coats the villi (the small hairlike protuberances that assimilate food products). Zeolite particles carry a negative charge and attract oppositely charged particles, according to their order in the Electro Chemical Series.

This is how Zeolite attracts heavy metals, toxins, parasites and the like to it. It binds them to the open points of the crystal and they get eliminated in the faeces or urine. Thus the body is detoxified.

Zeolite does not enter the bloodstream.

What about us at NZeolite Ltd

Read more About Us, examine the FAQ’s, read our detox dietary guidelines, and finally, browse through our products and their uses.

We are supplying quality detox products (based on zeolite and Bentonite) to New Zealand, Australia, South East Asia and USA.

We welcome your enquiry

“After nine days of a badly infected wisdom tooth and every natural remedy I could think of, a friend suggested I try clay. 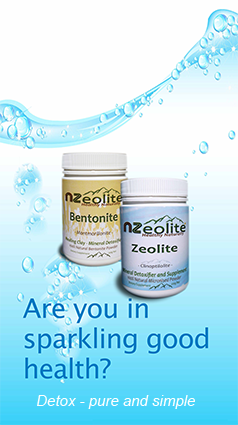